In case you missed it, there was a little event called the Super Bowl that took place earlier this month. It’s the biggest stage for America’s most popular sport, football. You also may or may not be aware that Microsoft is a big sponsor of the NFL and that they continue to try to find new ways to expand on the NFL experience. Though they offer apps for Xbox One and your PC that display stats and information alongside the live broadcast, Microsoft has now taken your NFL experience one step further: augmented reality with the new HoloLens. Yes, that’s right. Microsoft wants to take your football-watching experience to a whole new level, and quite frankly their vision looks amazing. Yusuf Mehdi, Corporate Vice President of Microsoft’s Windows and Devices Group, wrote a little article and said:

“What if game day was no longer confined to your television screen, but covered your room and took over your coffee table? Today, we shared a glimpse of that future in a brand new concept video unveiled at the Super Bowl 50 panel discussion, “The Future of Football: How Technology Could Shape the Next 50 Years of the Game.”

Microsoft put together a YouTube video that gives you a glimpse into what this might look like. Check it out here. Seriously, it’s something straight out of a science-fiction movie. 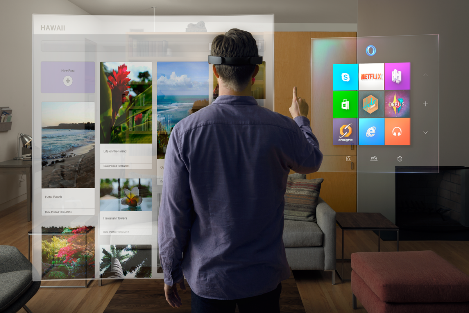 While they’re playing to all the Super Bowl and NFL hype with the YouTube video above, the HoloLens has an incredible range of possibilities outside of football and TV. Like Tony Stark in the Iron Man movies, the HoloLens lets you use pop-up displays and manipulate 3D virtual objects. The way it works is by intelligently mapping the room you are in, then pinning holograms in physical locations in the room. You can interact with these pinned holograms as if they were real objects. Engineers and architects can create 3D images, and expand or dissect them—and it all happens right in front of them, as if the 3D images were real. HoloLens users can easily collaborate remotely and be able to show people exactly what they mean or how to do something using video or more 3D images. 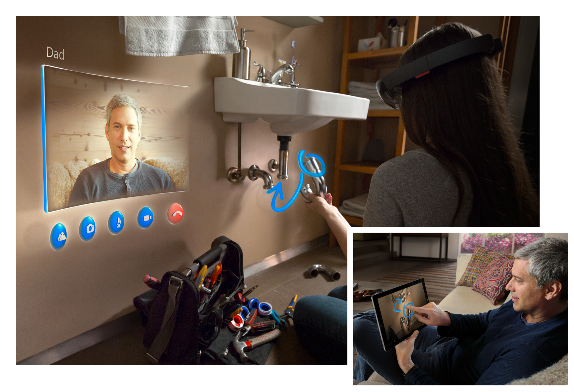 One of the coolest things in the HoloLens promo videos was something that anyone could relate to and use. They gave an example of a dad helping his daughter fix a plumbing issue with her sink using Skype. He was able to talk her through it and draw in real time, pointing to specific pipes and pieces showing where to put them. All this help appeared as holograms in her world. The possibilities and usefulness of this are endless.

For business or personal use, the Microsoft HoloLens seems like it could potentially be a life changer if it lives up to the examples shown in their videos.

Check it out for yourself here. Microsoft is already starting to ship developer models this quarter. Do you think you would use the HoloLens? I know I would.